It is a truth universally acknowledged that fantasy writers like maps. I recently discovered two great websites that let you generate fantasy maps of your very own! (I am in no way affiliated with either of these sites. I just like them.)

Inkarnate lets you draw your own continents, complete with features like forests, towers, and notes. You create an account, which is quick and free, and then you get access to this map-creation station: 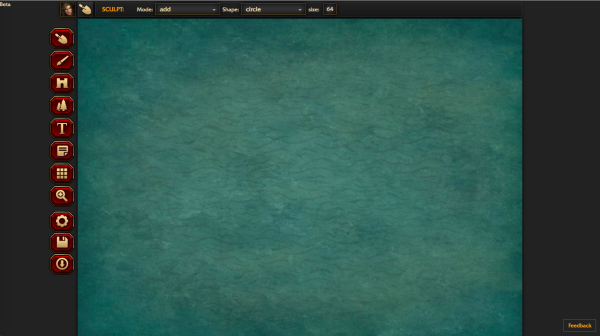 You can then save and export the maps you make. Here’s a little island I whipped up as an example: 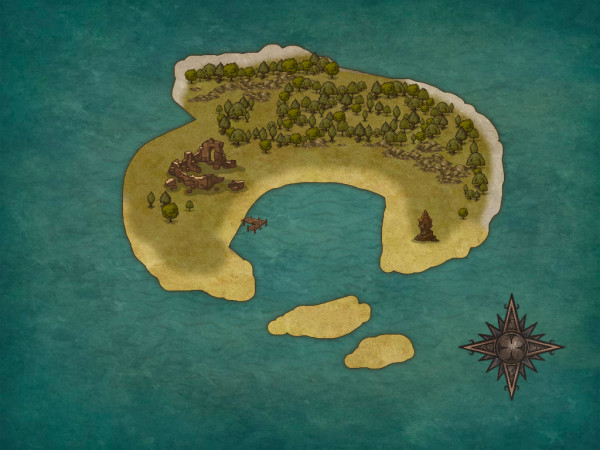 That’s pretty easy, but it gets even easier: the Polygon Map Generator will randomly generate islands for you. Then you can view them in 2D or 3D, plus from other interesting perspectives, like “Watersheds.” You can keep playing around with the settings and randomly generating islands until you get one that inspires you. No login required – just hit the “Random” button! Then you can export islands you like. 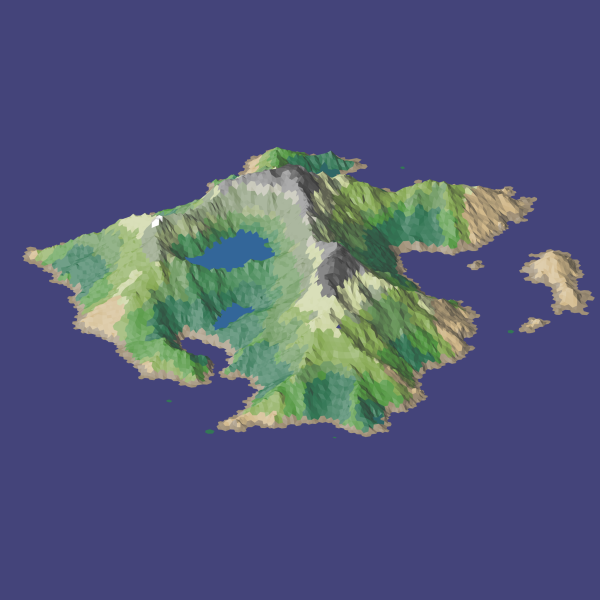 My only concern about this latter point (I can’t say I feel concerns about the former point – Zoë Marriott is allowed to look like or not look like any science fiction character she pleases) is the dubious legality of posting many images on Pinterest. Legality and ethics, actually – even if people couldn’t make a legal case over it, I do think the creator of an image should be able to choose how that image is used. My impression is that a vast number of the images appearing on Pinterest appear there without permission and do not properly credit their creators. I would hate to contribute to that. On the other hand, I feel it would be very difficult to create such an inspiration board entirely out of images that are explicitly pinnable as per their creators.

Anyone have thoughts about this? Good places to find images that can be legally and ethically stuck on one’s Pinterest board? Thoughts on the questions of legality and ethics involved? I figure that if I were to make such a board just for myself, and not share it with anyone, I’d feel a lot less squirmy about including whatever images I wanted. But if I were to, say, link to it on my blog, I’d want to be absolutely sure that every image on it could legitimately be there. Opinions?

On a different note, it seems like everyone’s linking to this (AS THEY SHOULD BE), but if you haven’t seen the article “We Have Always Fought”, check it out. Funny, readable, hard-hitting, and true.

8. Spoof of Twilight a la the Very Secret Diaries.

. . . Because I’ve discovered neat things I want to share with you guys. Not at all because I’m lazy.

2. A publishing-house intern made awesome chart of elements appearing on the covers of popular 2008 fantasy books. The winner: “swords,” followed by “glowy magic.”

3. Here’s an interesting article on vampires by Guillermo del Toro, who just co-wrote a vampire thriller called The Strain. My favorite part of this piece? I never knew this, but del Toro says the popularity of Dracula came in part from the book’s being excitingly high-tech at the time. Telegraphs, typing machines, blood transfusions – all pretty cutting edge in 1897, apparently.

4. Neato book trailer. Put the sound on – the music is maybe my favorite part.

5. At the Public Query Slushpile, we have a fun joke query.

6. In conjunction with the book Rampant, on which I commented enthusiastically last week, we have the official website of the National Unicorn Control Agency. Awesomeness.

7. Literary agent Rachel Gardner’s blog was discussing overused words, and posted a list of words writers might want to use sparingly, with the suggestion of using the Search function on words that you personally tend to abuse. Right there with you, Rachel – I’m thinking of searching my novels for “rather,” “almost,” and “just,” two of which make

END_OF_DOCUMENT_TOKEN_TO_BE_REPLACED

I made my weekly rounds of agent, editor, and writer blogs, and I came up with a few interesting things.

– Many of you may know this already, but I hadn’t heard about the Amazon snafu of last Friday. Basically, someone uploaded some pirated e-books to Amazon, and customers bought them, thinking they were the real deal. Upon making this discovery, Amazon refunded those customers’ money and remotely deleted the books from their Kindles. Lots and lots of people proceeded to freak out, writing articles galore about the impending censorship crisis and apocalypse of free thought. That might not have happened had the deleted books not been works by George Orwell, including 1984.

(That’s what his estate gets for refusing to let David Bowie make a musical of 1984 back in the seventies.)

Amazon says they’ve changed their policy and will no longer delete purchased books from users’ devices. The agents whose blogs commented on this mostly seemed to think it was silly.

I can see a couple of views on the matter. A student says he lost all the notes and annotations he’d been making on his e-copy of 1984 when it was removed, so that’s obviously a problem. Overall, though, it seems to me like a good idea to take pirated books out of the system while refunding the customers’ money so that they can buy the real thing, with royalties going to Orwell’s estate. It was pretty silly of Amazon not to realize that the media would go crazy over the deletion of these specific books, but I think the principle is sound. Ideally, an e-mail would go out first to say that the books were being recalled and why, and to explain how to transfer any notes, etc.

– I doubt this link will be around long, but this is insane! I wince, especially when I read the words “fiction novel.”

– The Writer Unboxed blog has a fun contest for wacky metaphors, in which you can win free books! Submission time ends in just a day or so.

– In other news, everyone should join me in eagerly anticipating the release of a book about man-eating unicorns and the badass women who hunt them. Early reviews have compared it to Buffy, and the author’s blog is fun and interesting, boding well for the quality of her book.

It seems the author has done quite a bit of research for the book, called Rampant. At first, I was surprised by the “unicorn hunters must be descendants of Alexander the Great” bit – Alexander the Great? Hunh? Why? Supposedly he got his warhorse, famous at the time, by rescuing it from men who were about to put it to death because it could not be tamed and ATE HUMAN FLESH. Later, people decided that the horse was actually a type of killer unicorn, and Alexander the Great became known during his lifetime as a unicorn tamer!

Also, today I restarted my part-time job at the library! Huzzah!