You know one piece of writing advice I see all the time? It’s that one that says that your protagonist must have a clear goal that s/he desperately desires, and the conflict must come from obstacles between her/him and that goal.

To that I say: Maybe.

Honestly, I’ve seen this particular nugget everywhere. I saw it again today, in this article on three-act structure. But recently I’ve really thought about it, and I just don’t think it’s always the case. Many characters in great stories do not have singular, readily-apparent goals. I might even say that it’s more common for them to be just trying to muddle along, to live their lives, to move toward what makes them happy and away from what makes them unhappy. Sure, those things are themselves goals, but rarely do I feel that a protagonist wants them desperately, or that, if asked, she would identify “living a normal, happy life” as her truest desire.

Naturally, some genres lend themselves more to characters who do have clear wants. 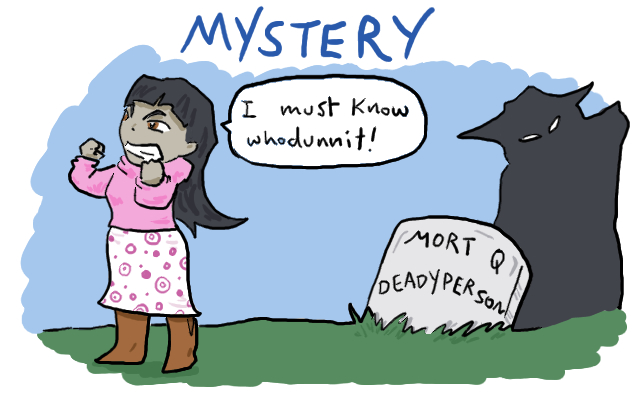 (Although many mysteries, like the one I’m currently reading and enjoying, feature amateur sleuths who don’t really want to be involved in their cases at all, and end up solving them not because they have a burning need to know, but because it’s the only way to get the whole murdery business out of their hair so they can continue with their lives.)

Many children’s books, especially the very early ones (picture books, easy readers) feature characters who seem to care about nothing else but staying up late, or getting a puppy, or whatever else is dictated by their titles. Take your best educated guess: what does the protagonist want in the book Dinosaur vs. Bedtime? How about The Pigeon Wants a Puppy?

It’s easy to find a quest novel wherein the protagonist single-mindedly pursues one goal. And when I say single-mindedly, I don’t mean that every single action and spoken line moves her toward that goal, only that it’s clear what her aim is through the book. If you asked her what she wants most to achieve, she could tell you. But again, this is not all novels – far from it.

[Get ready: I’m about to pull the Harry Potter card once again.]

I’ve had at least one creative writing professor get very frowny-faced over characters who reacted rather than acted, but you know what? It’s common! Even among awesome characters! Lizzie Bennett isn’t like, “Look out world, I know what I want and I’m going to go get it!” No, she’s like, “Doo de doo, rollin’ along with my wacky family, and oh! These newcomers to our neighborhood are interesting. And oh! Jane is sick – let me go care for her. And oh! I’ve been invited places, let me go visit them.” Etc.

Part of this plays into my theory that heroes – which is often, though not always, synonymous with “protagonists” – react. Villains are the ones who act. Batman can’t save Gotham if no one threatens it first. Does this make Batman a weak character? Nah. In fact, you could argue that protecting Gotham is his big, overarching goal, and making himself into a person who can protect it is the action he takes that predates the villains’ seemingly inciting action.

Which, in a usually-less-dramatic way, plays into the motivations of many other characters: they want, as I said before, to live their lives. They have spent their energy becoming who they are, and now want to continue their natural trajectories. Sometimes that trajectory is “get back to normal,” as with the protagonist of the mystery I’m now reading (Big Boned by Meg Cabot). Other times, it might mean, “make the best of a new, unfamiliar situation and try to find happiness in it” (Harry Potter, I’m looking at you).

So I guess that it really comes down to whether you’re willing to accept the motivation I’ve just described as a character’s Big Goal. I tend not to think it is, largely because I don’t think the character in question would see it that way. I think that if you asked Harry Potter in Year One what his biggest goal was, depending on when in the year it was, he might say “to win this Quidditch match” (clearly not the overarching goal of the book) or “not to get killed, I guess” (closer, but he only even develops this goal as a reaction to threats around him).

Basically, what I’m saying is that if you ask yourself, “What is my character’s overarching, driving desire in this book?” and don’t come up with anything more clear-cut than, “To handle the stuff that’s happening to her, and try to achieve good outcomes,” I think that’s okay. Lots of characters are, to the best of my interpretive ability, motivated this way. Not unlike lots of real people. It’s good to have clearer goals in mind for individual scenes (here’s where “win this Quidditch match” comes in), and they should tie into the character’s larger story, but as far as the Big Goal, I’d say not to worry about it too much.