Hey guys. Guys. So I went to this conference, and it was neat and everything, and I hope to recap it soon. I also read a bit of my writing aloud with other authors at the Brewster Literary Evening at our library, which I was strong-armed into doing because they had so few people sign up who weren’t poets and they wanted more variety, but which I nonetheless greatly enjoyed. Now, busy though I am with preparing to be clobbered by a hurricane with the same name as my mother (if this were fiction, there would be a really unsubtle metaphor in there), I have to share with you a thing that is great. That thing is Scrivener.

You may have heard of it already – I had. I’d thought, “Eh, it’s probably neat, but mastering it would involve time and I’d have to pay money and would it really make that much of a difference to my work and life?” (This is, incidentally, a fair description of how I feel about the idea of watching Doctor Who.)

And yeah, it does cost money (though I hear that you get a discount if you finish NaNoWriMo). But not all that much, and can I just say that it’s awesome? Multiple author panelists at the conference I attended raved about it, and I really liked the idea of the little corkboard displays and stuff, so I thought I’d give it a try. I bought the software and spent about an hour going through the full tutorial. And the niftiness factor, it is high.

I’d been thus far unsatisfied with other programs I’d used to organize my writing thoughts and research. A paper notebook is fine for brainstorming, but when I’m actually writing, there’s a laptop on my lap and nothing else, so I really wanted something on the computer. I tried just writing my notes out in my regular word processing program, but I would either wind up with one long, rambly document that I’d have to search through for a specific detail or an unwieldy number of shorter documents, usually scattered through folders in an inconvenient way. I tried the free downloadable program GrowlyNotes and, while some aspects of it are neat, it just didn’t work for me. Scrivener was the only such program I’d heard of designed specifically for writers, so it seemed worth a shot.

And it is great. Basically, opening a Scrivener document gives you a virtual binder (mine, at least, had been thoughtfully emptied of women) which you can divide into folders. The project I’m currently working on has a folder for characters, a folder for locations, a folder for general information about the geography and culture of this fantasy world, and a template folder. The template folder allows you to create templates – e.g. a character sheet – from which to easily create files. Each of these can hold text files, images, even sound files, which can be linked to each other, tagged with keywords that you can use to sort them, and viewed in a bunch of different ways.

For example, you can put them on a corkboard (corkboard!) as index cards (index cards!): 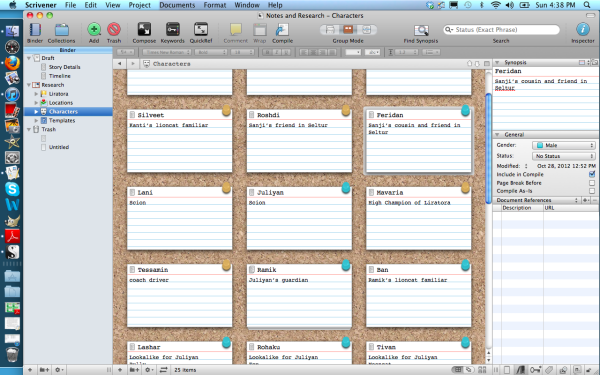 Each of these index cards represents the “synopsis” I’ve given to a full character sheet within the Characters folder.

Notice the different-colored pushpins in the upper right corners of the index cards. These represent colors I’ve assigned to keywords: in this case, the turquoise represents male characters and the gold female characters. (Turquoise and gold are the colors of this country, Liratora.)

If you don’t like the corkboard, then you’re strange, but you can see the files in a folder with their synopses in outline view, too: 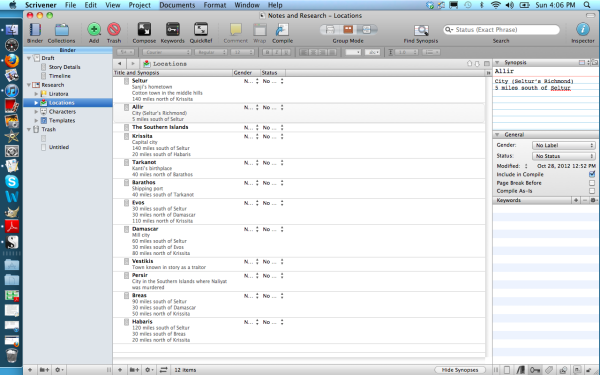 You can also split the screen: 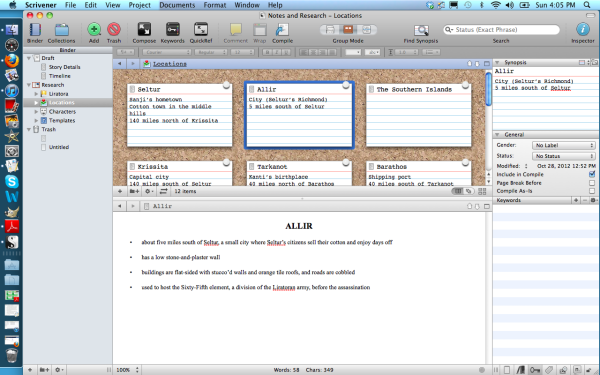 This view can be especially useful if, for example, you’ve found a picture that looks like one of your characters, and you put the picture in one panel and your current draft in the other panel.

Because that’s another thing. Even though I’m not currently using Scrivener for this purpose – I just wanted a place to put my notes – it has a lot of handy features for you to use in writing the actual draft. (Especially if you’re writing a script, which I’m not, but that’s cool.) Plus, when you go to export a draft at the end, it has some cool options, like exporting it directly into e-book-friendly format.

Plus, click on one of these to make it bigger and check out the little icons I got to choose for my Characters, Locations, etc. folders. How great are they? That’s what happens when you create a program specifically geared toward writers. Those icons are designed to represent “characters” and “locations” folders. And they’re not even the only options. I’LL BE SHALLOW IF I WANT TO SHUT UP.

5 thoughts on “We Need to Talk About Scrivener”