You know what’s always a good time? Worldbuilding. I like researching what would make sense in a certain situation, and I like brainstorming things that would be cool, and it’s satisfying to find the place where the two fit together.

In this instance, I have a population of elves, some of whom are about to appear in the novel I’m working on. I realized I wasn’t sure what they should look like exactly. I know what the elves of my fantasy world look like in general terms, but like humans, they vary in traits like build, skin tone, and hair and eye color. For these elves, I wanted to choose traits that would logically evolve in their home environment, a chain of equatorial, volcanic islands. I also wanted them to have a look that evokes fire/ash/smoke, since they are particularly attuned to fire magic.

So, I drew up a couple of possible color schemes: 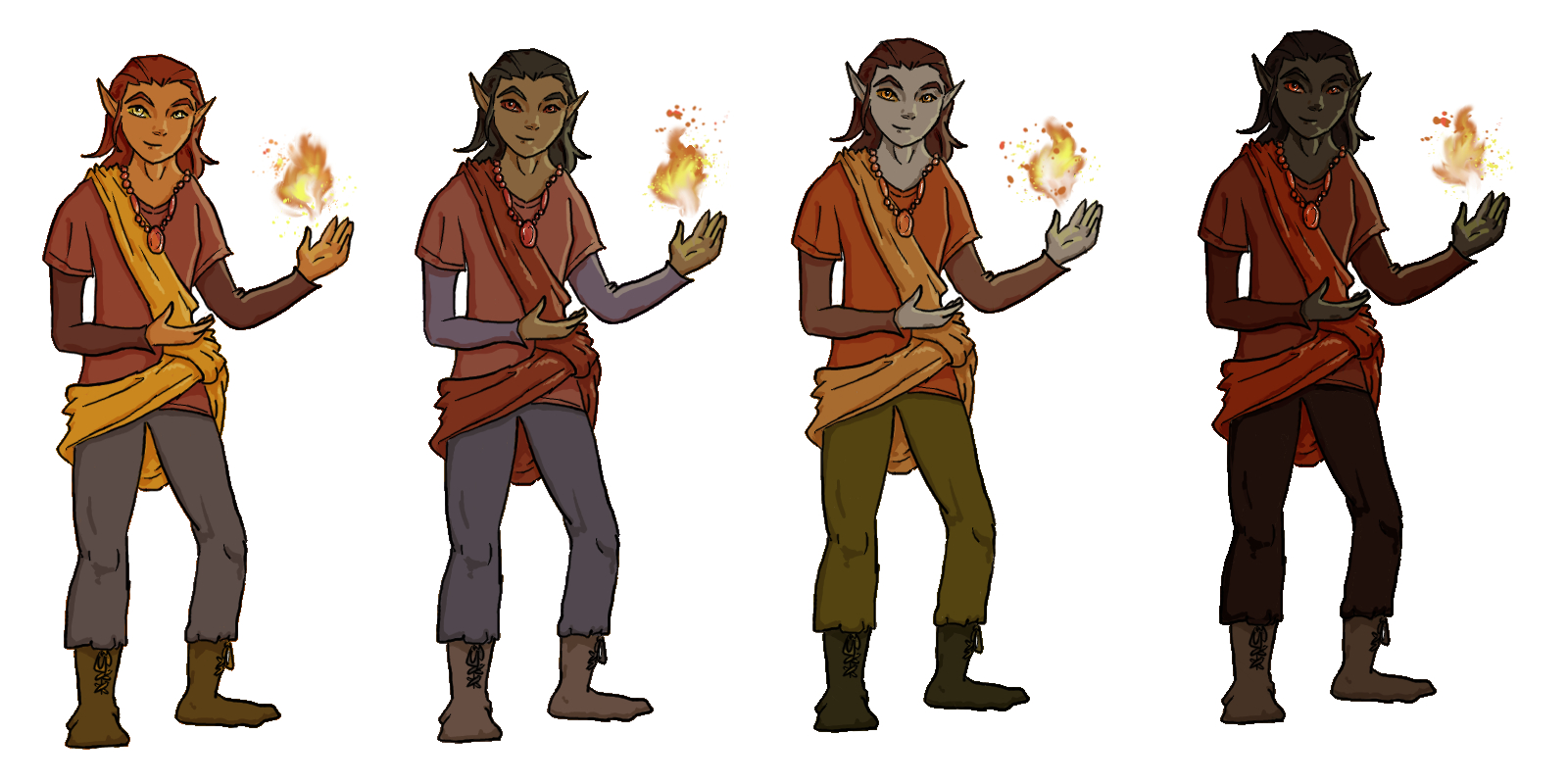 The first image rather un-subtly suggests fire, with its red-orange overtones. The second image reflects one of the skin tone/hair color combinations found among the humans living on the nearby mainland. The third image is grayer to be reminiscent of ash. The fourth takes into account that these are equatorial islands, so the elves should perhaps be quite dark-skinned. I gave the skin a slightly grayish cast to evoke charcoal and smoke.

Then, some research! The mainland closest to these islands is loosely based, geographically, on India. Turns out the real India actually has an island with an active volcano. It’s called Barren Island (gosh, wonder why?), and it’s in the Andaman and Nicobar island chain. These islands don’t straddle the equator, but they’re not too far off.

(The following is Internet research, and I can’t guarantee its accuracy. I would DEFINITELY do further research if I were actually writing about the Andamanese people. In this instance, however, I am just trying to determine what people living on an island chain like theirs might plausibly evolve to look like.)

The Andamanese people are comprised of multiple tribes with different languages and cultures, but have some physical characteristics in common. They are typically short and slender, with very dark skin.

The elves of my fantasy world are already short and slender, so that works out nicely. Otherwise, my research nudged me toward the elf design on the far right, the darkest one.

I take this also as an opportunity to subvert some fantasy tropes. These will be very dark-skinned people with red, yellow, or orange eyes (see again: fire imagery). When these traits appear in fantasy, the characters who have them are often sinister, and sometimes outright monsters. (Which has pretty terrible implications vis-a-vis perceptions of dark-skinned people.) These elves are neither sinister nor monstrous, but are generally seen as refined and creative. They are known for their fire magic and their main export, high-end glassware.

Now, I can get back to actual writing, knowing that I’ll be better able to describe these elves when they appear. Huzzah!