Two more of my No Flying No Tights reviews have just gone live on the site, and one is about a volume of Pokémon manga! (Specifically, Pokémon the Movie: Hoopa and the Clash of Ages.) Topical! Sort of! The other is about the first volume of a bright, poppy new magical-girl series called Zodiac Starforce.

(I’ve got a lot of reviews up on No Flying No Tights by now! If you’re interested, you can see them all here.)

I’ve spent some time lately thinking about an often-overlooked little element of description: lighting. In contemporary realism, lighting can generally be ignored unless it’s unusual. If you don’t describe it, readers will assume that it’s whatever lighting is typical for the situation in their experience: florescent lights in a classroom, for example. Which is generally fine.

But when you get into fantasy (or historical fiction set in a time before electricity is common), you start to have to ask yourself, “How can my characters see right now?”

If they’re outside and it’s daytime, the answer is pretty obvious. And if they’re outside at night, writers usually remember that their characters need a torch or a lantern or a helpfully bright moon in order to see. But what about indoors? Windows might be small and/or scarce, depending on your setting – is glass expensive? – and all the windows in the world won’t provide much light if it’s overcast or, you know, night. Besides, most buildings of any size have at least some interior rooms with no windows at all. What do your characters use to see? 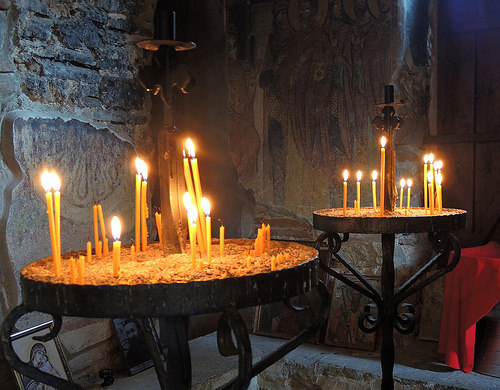 Popular choices in fantasy include lanterns, chandeliers, torches, braziers, magical light sources, and the evergreen favorite, candles. You also get a certain amount of light from fireplaces, though they won’t light a room much on their own. Each of these has its own pros and cons to consider. (Bonus: these can provide opportunities to further develop your characters and your world!) Among them:

Historically, people who could afford it often maximized their light by including mirrors and other reflective surfaces in interior rooms. A candle next to a mirror is MUCH brighter than a candle by itself.

I don’t write science fiction, but there must be a whole other set of possibilities and considerations there. What’s the lighting like on a spaceship? What do aliens use for light on their home world?