Real talk, y’all: I am Team Peeta for life.

I have oodles of respect for the people who respond to the whole Peeta/Gale divide with “Team Katniss!” But though I admire and like Katniss herself, when I read the trilogy, I was desperate for her to get with Peeta. I so rarely get to watch a heroine – especially a YA heroine, double-especially one in a genre other than realistic fiction – choose to be with a guy like him. A guy who’s not macho or alpha, who doesn’t seem concerned with whether his strengths and weaknesses align with those that are commonly considered “masculine.” A guy who lets the girl be the strong one in ways in which girls rarely get to be the strong one.

(Yes, I’m assuming a guy-girl relationship here. Most of the couples I’ve read about are straight, and the whole issue becomes less pronounced, or at least different, with gay couples.)

Peeta is a communicator. He’s empathetic. He has oratory skills and baking skills (baking skills are key, guys). He’s not a fighter, and in the context of the Hunger Games, this puts him at a definite disadvantage. But Peeta isn’t useless, no matter how many times he falls down in the Catching Fire movie. He’s less equipped for the arena than Katniss, and he knows this, and it doesn’t bother him.

I don’t have anything against Gale, per se. I just find him uninteresting. That is to say, he interests me as much as any other character in the world Collins has created, which is a lot, because I like her writing, but to me, Gale is a lot like the romantic interests of SO MANY dystopias and paranormal romances. (I think the guys have more of a tendency to be alpha males in those genres because the worlds they’re in are so dangerous. Maybe some authors fear that their male leads will seem weak or worthless if they can’t defend themselves, let alone their girlfriends.) He has the fighting and survival skills. He smolders. When he sees something he wants, whether it’s to kiss Katniss or to Fight the Power, he throws himself at it, even if he’s sometimes unlikely to succeed and may jeopardize himself and others in the process. He’s a Man of Action.

My YA heroine gal pals have dated Gale a lot. Together, we’ve done some swooning over his heroics; I’ve done some eye-rolling over his aggressiveness. Not that he’s not ever fun, but frankly, he’s not my type.

Peeta, though! Peeta is a rare thing. He’s a well-spoken sweetheart who is just as heroically willing to sacrifice himself for Katniss, but who would do it in a way that’s based on cleverness, not facepunching. And he doesn’t feel threatened by Katniss being a badass, so you know he’s never going to pull a Riley Finn on her. 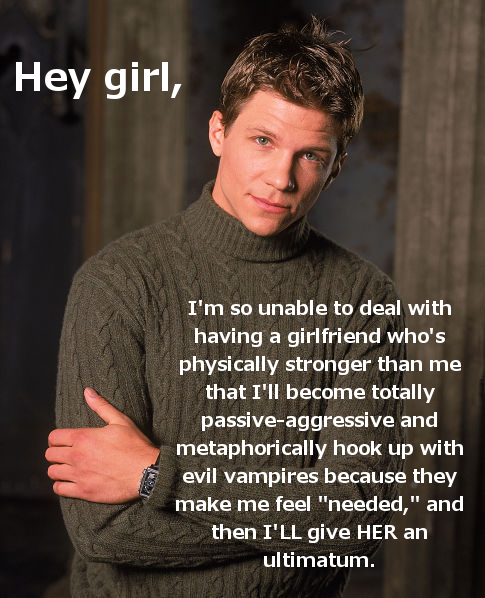 Not pictured: a guy worth dating.

Not that sweetheart guys don’t appear in these books. It’s just that usually, they’re the losers in the inevitable love triangles. Happily, I have found a few other YA books with romances that feature guys who I find swoony a la Peeta. (I’m not going to list realistic fiction, because I find the romantic interests there to be more varied than the arrogant-and-dangerous-alpha-hottie so common in paranormal YA or the damaged-but-smexy-alpha-hottie so common in YA dystopias. I’ll just say that for realistic fiction with a romance, my go-to is Sarah Dessen.)

Howl’s Moving Castle by Diana Wynne Jones – My favorite book of all time. Howl is arrogant and moody, but these things are more “comical flaw that Sophie can deal with” rather than “just part of his charm.” He’s also a self-described coward – but brave enough to go into danger when someone he cares about needs him. And he’s funny.

Magic Under Glass by Jaclyn Dolamore – A big part of the reason I like this book and its sequel so much is the fact that it’s a paranormal romance in which the guy, Erris, isn’t ooooh, so dangerous. (Nor is his role to be the protector of the girl from other things that are ooooh, so dangerous.) He’s actually less of a rescuer-type than a rescuee. But he’s kind, and his emotions feel like a real person’s rather than like the facial expressions of Batman.

The Selection and sequels by Kiera Cass – Um, spoilers? As far as which guy America chooses in the love triangle? I was so happy to see her pick sweet Maxon over pushy Aspen.

Shiver by Maggie Stiefvater – Sam is more an artsy type than a macho type. He’s got a traumatic past, but he has the optimism to still hope for a happily-ever-after.

Soul Enchilada by David Macinnis Gill – Romantic lead Pesto is earnest, caring, and accomplished in his area of expertise. Heroine Bug is more athletic and more aggressive than he is. The fact that this doesn’t bother him only adds to his charm.

If you have suggestions for books with this kind of romantic interest, I would LOVE to hear them! Otherwise, authors of the world: more, please?