So, awhile ago, I was looking at upcoming teen books to potentially order for the library where I work, and I saw this: 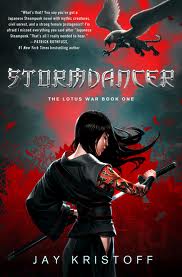 And then I saw this:

My heart, it went pitter-pat.

So I ordered the book for our library. It arrived, looking just as pretty as the image above, and has so far circulated a couple of times. I have not read it. But recently, I started reading some reviews that made my heart go things other than pitter-pat. Things more in the general vein of “sink,” if I had to be specific.

The first review I saw was this one at lady business, which broadly and briefly covers some facts that have been bothering people: author Jay Kristoff seems to have got a lot of his Japanese culture stuff (notably terms of address, whether or not pandas live in Japan) wrong, and then basically brushed off all criticism: “It’s fantasy, folks, not international frackin’ diplomacy.”

For a much more detailed, blow-by-blow account of problems one reader had with the book, see the review at You’re Killing Me. While I, too, would probably take issue with the Bathing Scene of Unexamined Creepiness (I must here recommend this excellent post on the male gaze in writing), the thing mostly under scrutiny in Stormdancer is that it’s inaccurate to Japan and Japanese culture.

Kristoff’s main response to this criticism seems to be a claim that the story actually takes place in a land like Japan, and not actual Japan. Some people are brushing this off, but I think it’s an important point. I strongly believe that people should be able – even encouraged – to write settings that are loosely based on non-European civilizations in the same way that oh so many fantasies take place in settings that are loosely based on European cultures. You shouldn’t be held to the historical facts of a country that your setting is only based on, any more than we should shake our fists at dozens of popular fantasy authors because medieval Europe didn’t really have this term or that animal.

I wrote myself awhile ago about coming up with another name for garments my characters were wearing that are close to saris in part because I didn’t want people assuming my setting was India when it isn’t; a similar concern is expressed by blogger Linda in this excellent post on her desire to write fantasy with Asian characters that isn’t set in Asia. (Yes, technically, one is only Asian if one comes from Asia. What she means is that she wants to write characters who, if they were in our world, would be considered to look Asian, in the same way that legions of blonde and blue-eyed fantasy heroes and heroines would look recognizably Caucasian, despite the fact that their fantasy worlds presumably have no Caucasus regions.)

BUT. The blurb right on the front cover of Stormdancer refers to the novel as “Japanese,” and Kristoff doesn’t correct it. There is, apparently, very frequent use of Japanese terms – the book actually includes a glossary. Curiously, some of the terms, like -sama and hai, are used incorrectly throughout the book but have their correct uses described in the glossary. This does rather support Kristoff’s claim that he has fudged and changed things a la George R. R. Martin, who bases his famous A Song of Ice and Fire fantasy series loosely on England during the War of the Roses, but changes spellings (“sir” to “ser,” for example).

Still, the impression I get is that Kristoff has crossed the line into appropriation territory. (For a good article on the location of this line, see the Zoe-Trope.)

I also get the impression he makes some choices that are just plain unfortunate. Linda, whose blog I mentioned earlier, also gives us an excellent rant on how frustrating it is that, in a world populated with characters who look Japanese, everyone swoons over the protagonist’s love interest . . . because of his green eyes. Certainly being attracted to people who look different from you is common – and often genetically useful – but to make everyone wildly attracted to (and not even a little, um, freaked out by) an eye color that presumably they’ve never seen on a human before? And an eye color that, not gonna lie, is pretty much a white thing? Kiiinda problematic.

Related to that, one thing I’ve personally gained from all this: the idea of researching different cultures’ standards of beauty. I think that paying so much attention to eye color is really kind of a white thing – if everyone in your culture has brown eyes, are you going to notice it when you meet a new person? That would be kind of like noticing that they have a nose. (On a side note, how hilarious would it be if a character did describe each person s/he met without taking anything for granted? “He walked upright on two legs, with one head located at the top of his body . . .” Somewhat hilarious, is my guess, followed by very tedious.) I’ve already tried to emphasize other, non-eye-color features in the aforementioned not-set-in-India fantasy, but I’ll be curious to learn more about how other cultures measure attractiveness.

3 thoughts on “If You’re Going to Dance in Storms, You Should Probably Research Them First”